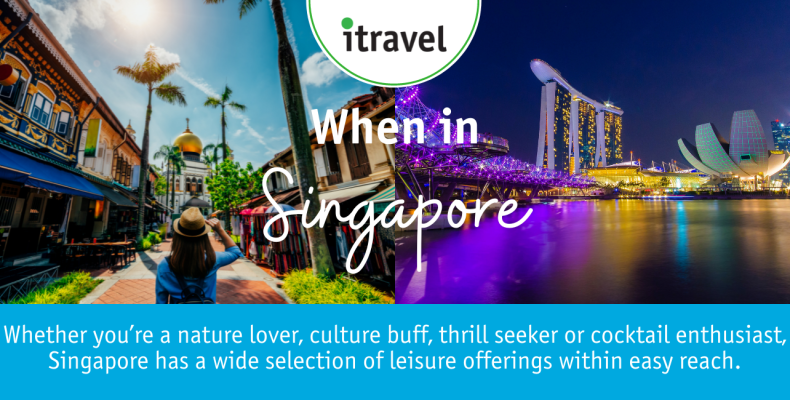 Singapore is a bustling cosmopolitan city populated with high-rise buildings
and landscape gardens. A harmonious blend of culture, cuisine, arts and architecture, Singapore is a dynamic city that’s rich in contrast and colour enabling travellers to ignite their passions. So take the time to explore and discover what awaits in Singapore.

Food in Singapore is taken very seriously. From cheap hawker fare to Michelin-starred fine dining, food-enamoured Singaporeans will line up for it, Instagram the hell out of it and passionately debate whether it is up to the hype. Don’t fret about finding a place to chow down, as each neighbourhood is home to local hawker centres and coffeeshops dishing up some of the island’s best meals for just a couple of bucks. Simply follow your nose or join the longest queue whatever morsels lie at the end, they are almost guaranteed to be scrumptious.

The concrete jungles that once dominated Singapore’s skyline are slowly giving way to green skyscrapers, which look more like living ecosystems than business hubs. Fervently working towards its “City in a Garden” dream, the nation is ploughing money into becoming more sustainable and, well, green. Head out of town a little and you’ll find plenty of walking trails, treetop jungle bridges, wildlife galore and the city’s green jewel, the Unesco World Heritage–listed Singapore Botanic Gardens: these are the lungs of Singapore.

When the sweltering outdoor heat gets too much, Singaporeans love ducking inside for a spot of retail therapy and a good dose of air-conditioning. Orchard Rd is the queen of shopping malls: with all the high-street brands, plenty of high-fashion houses, and a few discount outlets thrown into the mix, everyone’s needs (and more often wants) are catered for here. If you prefer your shopping a little less mass-market, head out to local neighbourhoods for independent designers, quirky art galleries, bustling markets, Chinese medicines, Persian carpets and a sari or two.

MALDIVES – July 2019
I couldn't think of the most perfect location to celebrate my 25th Wedding Anniversary than...
AYRES ROCK/ULURU – June 2019
My Uluru Bucket List Experience. Something that should be on the top of one’s list....
FRIENDLY FIJI ISLANDS
Happiness is here! While most of us can’t resist the temptation to laze around on...
WANT MORE
Travel in your Life?